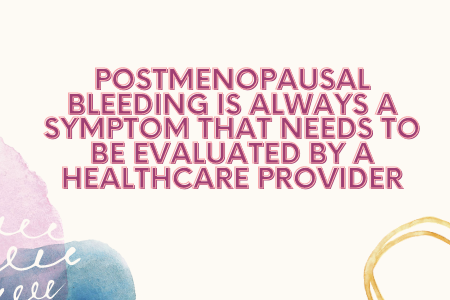 Menopause is the time of a woman’s life when she stops menstruating permanently. It is confirmed by missing your period for 12 months. The average age of menopause is 51 years, but the normal range is 45 years to 55 years. Bleeding or spotting after this point is called postmenopausal bleeding (PMB). Postmenopausal bleeding always needs to be check out by a healthcare provider. Many times it can be due to a minor health issue; but it can also be a sign of more serious disease like cancer in the uterus or vagina. If found early many of these cancers can be successfully treated.

The years leading up to this point are called perimenopause. This is the time that leads up to menopause. This phase can last for up to 7-10 years. During perimenopause, shifts in hormone levels can affect ovulation and cause changes in the menstrual cycle (women can skip periods for months; or bleed too often). Bleeding less than 21 days from the beginning of one cycle until the beginning of the next, bleeding longer than 8 days at a time,  bleeding through a pad and hour, or bleeding after sex are also problems that need a medical evaluation- but these are not the intended focus of this article.

Most of the time, postmenopausal bleeding is caused by noncancerous conditions:

These are generally not serious problems and can be cured relatively easily.

However, about 10% of the time, post-menopausal bleeding is linked to cancer of the cervix or uterus and so it is very important to have it checked.

What will happen at the appointment when I am evaluated for PMB?

How is PMB treated? Treatment depends on what the suspected cause is: